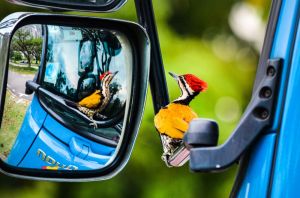 I’m not sure I ever confessed this before, but I am one of those people who writes a year-in-review Christmas letter and mails it off to about 50 different people strewn across the globe.  Theoretically, I assume that none of the recipients groans on receiving it – though I can’t be entirely sure about that. I do get the sporadic positive feedback. The best part is that each year one or two of the readers are inspired to respond in kind. I get all sorts of news and pictures and updates from people I haven’t heard from in way too long.  That, alone, makes the whole exercise worthwhile.

A second perk of this year’s efforts was that – once I was done – I had to admit that 2017 did NOT suck as much as I had thought it would at the start. It was not all exhausting postandpresenttrumptraumamalaise after all! There were wonderful travels and reunions and moments in teaching. There were new (learning) experiences and moments of parental vicarious glory while listening to my children sing or perform.  My (originally African) daughters became dual citizens of Europe and the USA.  I rediscovered ice cubes and developed a taste for cooking. I got a boat named after me! . . .

Ok, ok, in that last one I am fudging a bit. It is not a yacht or anyt

hing. It’s a tiny remote-controlled bait boat. And it wasn’t actually my husband’s idea to name it after me, but his fishing buddy’s. And he only used it once before it broke down. But, still – I got a boat named after me! How many people out there can say that??

It began at a Christmas market that I went to with my husband and my dear friend Lyart who was visiting. We stopped at a stand full of lovely, handmade birdhouses and Ly immediately bought us one.  A few mulled wines later, my husband disappeared and returned with a second, bigger birdhouse. In the following days, I excitedly purchased all sorts of birdfeed and then pressured the hubby to put up/hang up the houses in our yard. We filled them with seeds and then withdrew back into the house to watch. 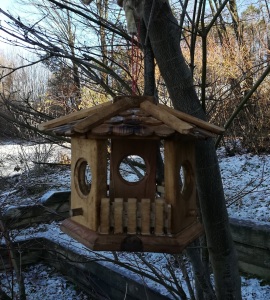 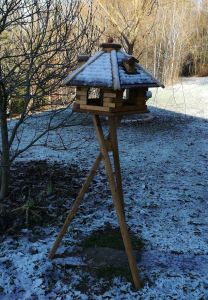 The birds started arriving almost immediately. Mostly little white and blue ones. “What are those?” I asked my husband and he informed me that they were “Kohlmeise”. I looked that name up and found out that, unfortunately, these birds are called “great tits” in English. Then another bird appeared and caused a lot of excitement.

“What is it?” I asked. My husband replied that it was a “Specht”. I google-translated that name and the word “pecker” popped up on my screen. I didn’t like where this was going . . .

I’m not sure I ever confessed this before, but I am something of a prude. I don’t run around the house in my underwear. I DO advise my teenage daughters to take their time and not rush into serious relationships. I don’t get racy jokes. I don’t use swearwords or “dirty” words and rarely hear them in my own household.

. . . What can I say? I still fully intend to continue this new hobby of bird-watching (though, I don’t intend on talking about it much). I’m hoping it will help me cope with whatever 2018 brings, the way chicken keeping did in 2017.

The husband dragged me to a “Small Animal Show” to look at chickens last weekend. Okay, okay, I wasn’t completely against the idea. But his confession of wanting to purchase two more Wyandottes there . . . and one of them a rooster!  . . . AND with the idea of starting to breed them!! – well, that was too much. I had to go along if for no other reason than to stop this insanity. 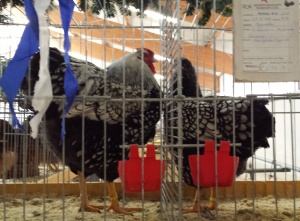 The first thing we saw on arrival was an absolutely gorgeous Wyandotte couple – and so obviously in love! And a big blue ribbon was hanging on their cages. Suddenly I was half on board with the whole breeding idea. I wanted those chickens! But, alas, these particular two were not for sale. The ones we could have were clearly inferior. I was less on board. We needed a little time to come to a decision.

We walked around and looked at the other animals for a while – more chickens and other sundry, questionable species. Here is a sampling of the lovely specimens we saw. 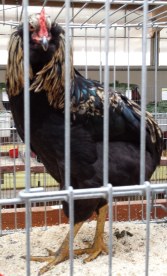 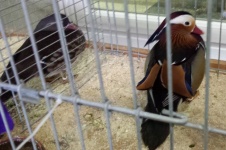 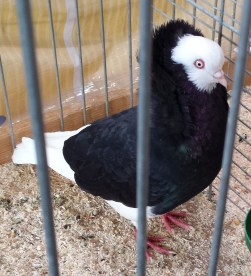 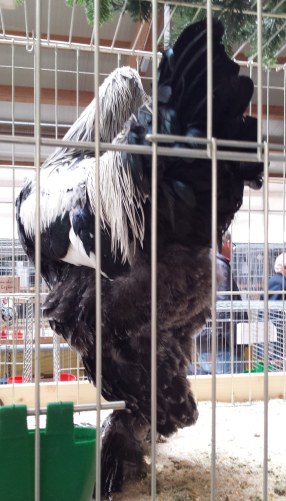 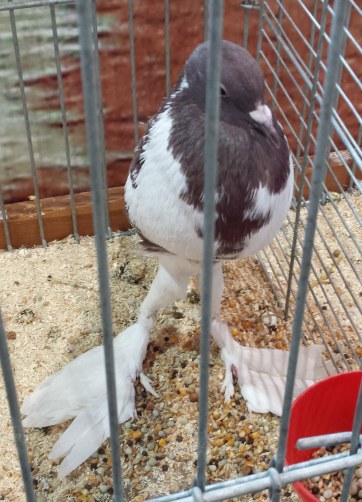 And then came the moment when I saw her – the perfect chicken.

Beautiful form and coloring. According to the information by the cage, she was also a good layer of eggs AND a good meat breed (not that we’d ever eat one of our own chickens.) Sturdy. Uncomplicated. There was only one tiny problem: the name. 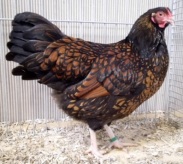 This was a “Deutsches Reichshuhn”. Translation: a “German Reich’s Chicken”.

There was no way my Austrian husband was going to welcome a German Reich’s Chicken into our flock.

How can I explain this? 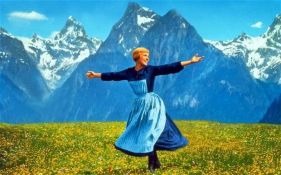 Have you seen the film “The Sound of Music”? (Of course you have!)  So, tell me, in what scenario would Captain von Trapp welcome a German Reich’s person into his beloved homeland? None!!  Never!! Think of my Austrian husband as Captain von T. Now . . . were I anything like Maria von Trapp – in the film, anyway – I would have understood my husband – maybe even admired and supported his stance . . .

There were a few problems though.

First – that German Reich’s hen really was an attractive chicken. Secondly, those Wyandotte’s were so obviously substandard. Thirdly, let’s face it – I am nothing like Maria von Trapp – at least the film version of her.

I do happen to know, though, that the real MvT was also nothing like Julie, because I actually read her book. It was . . . disappointing to say the least.  Only “The Thornbirds” supersedes it on the “Worst Book Ever” list. It did, however, give me a new insight into the real Maria – who didn’t want to be married off to a rich widower with seven snotty kids. She wanted to be a nun. She was coerced into the marriage gig by her Order and subsequently went through life with the martyr’s mantra “God’s Will Hath No Why”. She was certainly no part of any resistance.

So . . . I channeled her, meaning the true, non-julie-andrews, Maria von Trapp and argued with my husband about our poultry decision.

“I sink zis German Reich’s chicken is EXACTLY what our sorry flock needs! She will finally bring some ORDER to our chaos! JA WOHL!  Zere will be a new attitude! Our chickens, zhey will get back to work! Zhey will tear out all zose pesky Edelweiss weeds by zhe roots! Egg production will increase! Zhe neighbors will learn to respect us again!”

For some inexplicable reason, my arguments didn’t work. 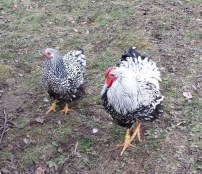 We took the sorry, second class Wyandotte pair home with us. The rooster became Gustav’s special friend fairly quickly. The hen refuses to enter the stall at night. She sneaks under the fence and then waits there, in front of the hen house(or under it), for me to come down, pick her up, open the door and stuff her in. She clearly likes the special attention.

Egg production, in general, has not increased.