This one is for Alison With One “L” for making me laugh out loud with her last post (“Lost Time, Indeed”) in which she deals with her PTSD (Proustian Traumatic Stress Disorder).

As much as I would like to help you with your weightier existential questions, I am, unfortunately, a bit of an agnostic when it comes to packing peanuts and quantitative tomato decisions. I also won’t be much help when it comes to an obsessive need to finish every book, however recklessly started, because I share that particular quirk . . . ( . . . although! . . . I admit to the occasional skimming – e.g. the last 30 pages of “War and Peace” or the Mueller Report footnotes). How I CAN help, maybe, is by telling you the advice I would have given you had I known you were about to crack open a Proust – in the hope that it may positively influence your future choices in reading material and help you toward the non-remembrance of painful things past.

Belated Piece of Advice #1: To start off, I’m thinking what you need now is something  . . . shorter. So when fondling the next massive tome, stop and consider the alternatives. Behold: 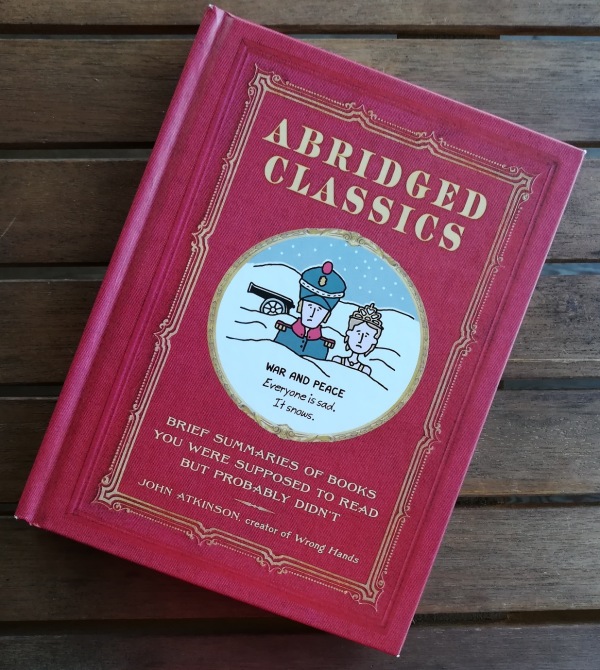 Behold again (the novel you just finished in a nutshell):

Belated Piece of Advice #2: In case the above is a bit too superficial for your current frame of mind, here is a more philosophical yet still logical approach to decision making. Starting with some basic Math, I think we can agree that:

Now let’s apply this logic to a certain French novelist.

I rest my case.

Happy future reading, Alison! May it be pithy.

In case you liked the first sample from this book, here are a few more of my favorites . . .

Friday. 9:15 am. I leave work early to go to my appointment with the neurologist. I’m nervous because I have no idea what to expect, having never been to this particular type of specialist before. At the moment I start the engine,

my daughter is at her school and just beginning her oral graduation exam in the subject of Sports Science. She is summoned by a teacher and has to push a button to generate two random numbers which will determine the two topics she can choose from. 4 and 8 come up, which means either “Endurance Tests” or “Sports Injuries”. She chooses the first one and then has 45 minutes to prepare –

the same amount of time I have to get to the doctor’s office.

While driving, my mind runs through the litany of tests and pricks and probes and irradiations I have gone through in recent weeks. I would soon be adding hammer taps and zaps and god knows what else to that list. And then there were the possible diagnoses, running from bursitis to Lyme’s disease to rheumatism to sclerosis. Somewhere in these ponderings, fleeting thoughts about how my daughter is doing wander in and out. While “taking it easy” for the past weeks,

I often listened in on my daughter’s tutoring sessions with her father, who had taught the subject himself for years. As is common when parents try to teach their own children, those sessions could become pedagogically questionable tests of endurance for both of them.

10:00 am. I enter the doctor’s office and am immediately sent on into an examination room – no waiting at all. The neurologist is sitting at his desk, puzzling over my various lab results. He openly admits that he doesn’t understand why my regular doctor sent me here. There is no sign anywhere of serious health issues. But he would do a quick test anyway, if for no other reason than to rule out neurological problems he already knows aren’t there. He proceeds to attach electrodes to various spots on my ankles and lower legs and then send little jolts of electricity through my body. It is a creepy feeling each time, but as with many things, the expectation of each zap is worse than the thing itself. The memory of the sensations fades quickly.

At the same time my daughter is getting pelleted with questions from a panel of teachers and supervisors in her exam. She would tell me later that she was incredibly nervous and could not even remember what the questions were.

When my own test is over, I pepper the doctor with a bunch of questions about various flags on my lab results and what, if any, he thinks my next steps should be. What further examinations should I undergo? Basically none. Why two such bouts of bursitis in two different joints in such a short time? Coincidence. What can I do to prevent further attacks? Not much. It is probably just normal wear and tear and a bit of bad luck. So there may be more of these little endurance tests in my future. Or not.

11:01 am. I decide to stop at the car wash on my way home. While waiting, I start texting my daughter to ask how the exam went. Three words into the message, my cell rings

and it is her. She is done and she isn’t sure how it went, but her favorite teacher gave her a little thumbs-up signal as she was leaving and she thinks she answered every question and she said everything she knew and she hoped it was enough and now she just has to wait one more hour for the results . . .

I tell her to call me as soon as she knows. I then drive home and proceed to stand confusedly in my kitchen for a while. I have nothing to do. Then it hits me that I haven’t swallowed any pain pills yet today. I decide to stop taking the medication altogether and see how it goes.

my daughter informs me that she got an “A” on her exam. Her last hurdle has been mastered. (She still has one more exam in English on Monday, but everyone knows she will sail through that one.) It’s now official: High school is over and her life can begin.

And mine can resume.

So here’s a possibly original take on the classic “why I haven’t been posting lately” post: I have just been so busy with one getaway after another.

First there was the sick leave, which, if I am honest, (and now that the memory of pain has faded), was really kind of nice. I have several crocheted animals to show for it.

That lasted about a week until boredom set in and sent me back to normal work for a few days. The week after was spent with two colleagues and twenty kids between the ages of 10 and 15 in an unheated house on an icy lake in Carinthia. Crap weather kept a lot of us in the one warm dining hall / arts and crafts / common room for most of the time. I taught a lot of kids to crochet and carve hiking sticks and make juggling balls with rice and balloons while my two coworkers took care of sports activities, homesickness and conflicts. We shared the task of kicking boys out of girls’ rooms and vice versa in the nights.

Back home, there followed an abnormally  over-excited week of work, thanks to the fact that the sex education experts were coming on Thursday and half the school kids were in a permanent tizzy – until the workshop was over, that is. Thursday at 12:30 pm they all casually emerged from their daylong sequestration in a state of feigned blasé whateverness.

(Note to future self: schedule the sex workshop BEFORE the trip to Carinthia!)

The following weekend – last weekend – was spent with my husband in some long overdue twosomeness at a nearby spa – my birthday gift to him. It was really perfect timing. With a long work slog just behind him and a mammoth one coming up, this was his one chance to unwind and unplug for a few days. Experience has taught us that we don’t see much of one another in the last weeks of the school year. For us teachers, June is the cruelest month.

Upon arrival at the spa, the first realization was that he had forgotten to pack swimming trunks. He rejected my idea to simply buy new ones. He didn’t really want to spend time in the water anyway, he said. He would start his training for an upcoming mountain bike tour and take long runs instead. He checked his cell phone and email.

“Whatever you want,” I said, and secretly hoping that the spa would work its magic.

It did. By Day Three he was napping on a lounge chair by the pool.

Back home again, I stared at my calendar for the upcoming month and became confused. It slowly dawned on me that – at least in my case – this year was as good as over. First off, three long holiday weekends all fall in June this year, so I only had 10 more school days – and those were mostly excursions and sports days and special projects. Written into my calendar were some concerts and fests, a recital, one play and a canoe trip. There was a day at the public pool. There was a high school graduation ceremony and a big family celebration. There was the last day of school and the sentimental ritual that includes.

June was going to be a breeze!! Or so I thought.

The way I see it, Life is not a pathway forward but a curve-filled trek, always spiraling back toward some earlier point in time, though maybe on a higher or lower plane. That idea is behind the name “circumstance” and the way my blog entries often tend to end at or near the place they started.

In the case of this post . . . I am back on sick leave. Whatever caused my hip problem (which is much better now) has wandered up to my left shoulder. I’m back on anti-inflammatory meds and have new specialists and tests ahead of me next week. I assume there are also some hefty antibiotics in my future and some physical therapy. Olga will probably be beating me up again.

. . . my earlier experiences tell me the worst of the pain involved (with the exception of Olga) is probably already behind me.

. . . I assume I will be able to take part in all of the events in my calendar that any one-armed person could manage and that is most of them. The canoe trip is probably a no-go. Shucks.