(A White Mother of Black Children Reflects on Privilege) 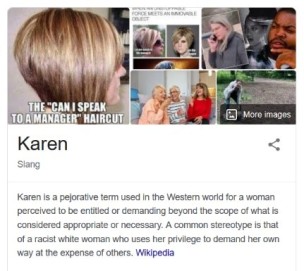 It has become nearly impossible for any informed American to ignore the subject of white privilege in these turbulent times.

But for many, I suspect, the question has remained distant, intellectual, or abstract. In my case, it has been intensely personal. I have discovered myself to be completely and utterly ambivalent about it.

Two realizations keep recycling through my brain and confusing me. The first came after watching a few seconds of the video of the murder of George Floyd (which was all I could take) and then thinking, with utter abhorrence, “In this scenario, I am not the neck. I am the knee.”

The second realization was that I have spent the last 20 years ferociously wielding my white privilege like a shield for the sole purpose of protecting my black daughters. But my ability to do that is now coming to an end. The older one has begun her new life in an apartment in Graz and the younger will be moving out and joining her in about six weeks. They will have to go on living without my shield.

I won’t be there to silence passers-by.

I won`t be there to make the train conductor think twice about asking for their tickets in a suddenly different tone.

I won’t be there to stop strangers from touching their hair.

I won’t be there when the neighbor downstairs tells them that they walk too loudly.

I won’t be there when the policeman asks them for their identification.

No, they are going to have to go through this world mostly on their own now. And what a world it is.

My learning curve about racism here and in the United States has been a long one. I look back at some of the statements I made in lecture halls and can only shake my head. I remember discussing a “groundbreaking” article about how economic success in life has as much to do with luck as with talent or drive. I felt at the time that it was important to challenge the prevailing myths about self-reliance and “picking yourself up by the bootstraps” and dishwasher-to-millionaire American success stories. It didn`t occur to me at the time that access to “luck” had racial preconditions. That was about the time when we were planning to start a family.

Years later, when the anti-foreigner movement was underway here in Austria, I argued that “foreigner” was just code for non-white races. I said that, in contrast to Austrians, Americans had dealt directly with the topic of racism and were starting to come out of the other end of the tunnel. I thought. That was about the time when we were considering international/interracial adoption and wondering if it would be fair to the child.

From there, I had the revelation that the concept of “race” was merely a social construct and not a real thing. After all, if you go back far enough, we are all Africans. While raising my children, however, I discovered that race was only a construct for white people. For others experiencing the consequences of race-related belief systems, it is a real thing. And a danger.

I am the knee. I am the white woman calling the cops on a Central Park birdwatcher. I am the person who saw a suspect in twelve-year-old Tamir at the playground. I am a Karen.

This very morning, I discovered that new slang term (“the Karens”) in a New Yorker article. I told my husband about it and he found it a bit too amusing. He immediately googled for more information. Later, during breakfast, I asked my daughters if they had ever heard of the term. There was an uncomfortable silence and a meaningful look passed between them. Then the elder daughter answered.

My four-week stint (or eight, depending on how you look at it) of experiencing unemployment has come to an end. I just had my first day back at work. The Hummingbird School has survived its own initial incompetence in crisis management, and starting Monday, (most of) the kids will be coming back. To comply with all the requirements set by the government and school board, we had to prepare a whole new physical environment in the classrooms – new nests, so to speak. Gone are the couches for lounging and the big carpets where we sat for circle discussions. Gone are the balls to play sports with during the recess. Gone are all the chairs in the small kitchen. Gone are the Montessori materials that get passed from hand to hand or are not conducive to being disinfected. Gone are the glasses and pitchers of water in the classrooms. Gone are the computer stations for c 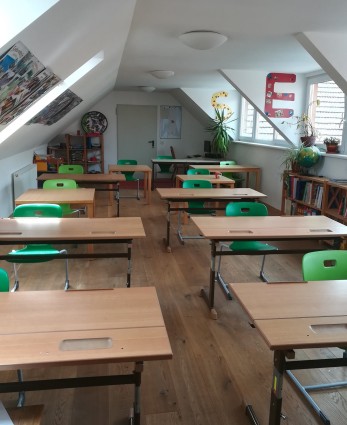 ommon use. Gone are the musical instruments and board games. Instead, the room is filled with socially distanced, individual desks where the students will sit for most of the morning. In the front of the class there is a space for me to stay put and – for the first time in my career – teach lecture-style to a captive audience.

We’ve divided the students into 4 groups of roughly 10 kids apiece. Two of the four will come each day on an alternating schedule and each group will have it`s own entrance into the school. The ones who will be filling this empty classroom will disembark from their school buses in masks, enter the building, and immediately wash their hands before going to the classroom. They will take a seat and only then remove the mask.

I confess that I feel uneasy in more ways than one about these first steps into the new normal. While planning with my team members, we talked about whether it was a good idea to assign yet another text about their experiences in the lockdown and distance learning. I suggested that the kids reread the reports they handed in near the start and then write about what changed over time. In my case, I worried about feeling confined at first. Now at the end, I find I don’t really like the idea of leaving the house if I don’t absolutely have to.

I wonder if this feeling is normal. Clearly, I have had it easy. Between my spacious house and big garden, my family situation and hermit genes, it’s not like it has been hell. I’ve honestly enjoyed having my whole family around me, not to mention so much time that I stopped monitoring its passing. (“What day is it today?”) I could have continued on like this indefinitely.

But this is not where we are at here in Austria, so I guess it is time for me to come out of my hiding place. The rest of my household is doing so too (if somewhat more eagerly than me).

Whereas the school nest shown above is about to be filled up, my home one is emptying out. Last week, our refugee son moved to another village to be near his brother. The plan is for him to transfer to a school in Graz for his last year. (There is a long story behind these decisions that I won’t get into here. I will only say that I hope he will be happier and more productive with this new living situation.) Yesterday, my elder daughter moved back to her apartment in Graz after two months with us. She took my daily concerts with her. That leaves just one – my youngest daughter – who will be taking her graduation exams starting a week from now. Her original plan for a work/travel gap year got nixed by Corona, so she will be starting university in the fall and, of course, moving into the apartment with her sister.

It was while listening to a conversation between the daughters about decorating the place and the timing of Lily’s move, that the realization finally washed over me. They were talking July – or August at the latest. “Wait!” I thought, “It’s almost June already!” Too months from now, it will be just me and the husband and a whole lot of silence.

While on our daily dog walk, Nice Neighbor Lady told me that her son refuses to celebrate Mother’s Day, saying first that every day should be Mother’s Day and second, that it was a Nazi creation. It’s not, but after that, I didn’t have the heart to tell her how wonderful mine was.

It started early with two new flowers for my garden and then a trip to my sister-in-law to pick up a washing machine (along with a whole bunch of other furnishings) for my daughters’ new apartment. From there we went to a (socially distanced) family gathering where I got to see my mother-in-law for the first time in two months. Since the golf courses have reopened, her life is back in order again. We couldn’t stay long, because my daughter had to get back home for a performance. It was a Mother’s Day Concert being livestreamed from the nearby spa featuring local musicians. I don’t want to brag too much, so I won’t say that she stole the show. Instead, I’ll quote a few of the WhatsApp reactions from friends and my sisters in the States:

Right before leaving for the concert, my husband called out to me that my favorite chicken just hatched a new chick. (She actually let the other hens do all the brooding work for 19 days, and then took over for just the last two. Crafty girl!) Right after the concert, my Skype started chiming and I got to spend the next hour with my own mom. And finally, shortly before going to bed, my daughters posted on my Facebook page, including two of my very favorite photos. Here it is – or at least a doctored version with names changed to protect the perps: 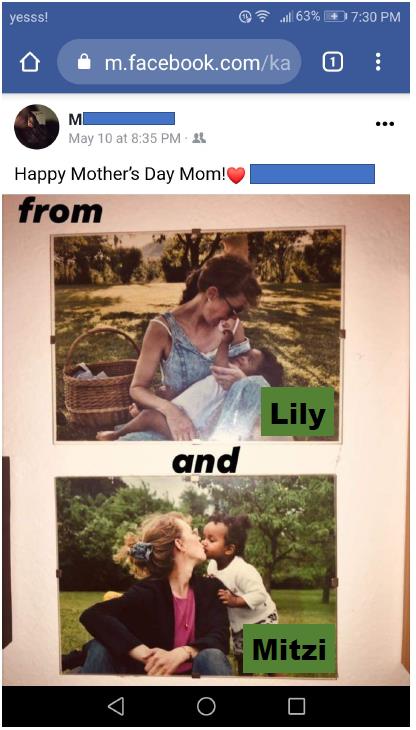 What a wonderful day full of momstuff, sisterstuff, daughterstuff, and grandchickendaughterstuff!  To spread the joy, here are two songs from my favorite singer: 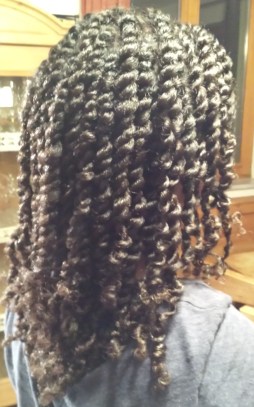 A few years ago I joked about putting “Chauffeur” on my résumé. Now I am thinking about adding “Hairdresser” – maybe with an added note: “specializing in African hair and styles”. Last weekend I spent 7 hours learning how to braid in extensions. Today it was the younger daughter’s turn and she decided on twists. That was a relief because they only take about 3 hours, whereas braids can mean anywhere from 8 to 12 hours of work.

As always, we began by negotiating about which series on Netflix we would watch – she vetoed Star Trek Voyager and I vetoed Orange is the New Black. We both know enough by now not to even bother suggesting Pride and Prejudice or Vampire Diaries. We decided on Gilmore Girls. That was a nice mother/daughter thing to do.

Except that I didn’t give birth to my daughter at 16, I adopted her at age 40. And that our conversations aren’t all fast-paced, witty and sparkly – we tend to have quiet, serious talks interspersed with a lot of not uncomfortable silences. And we don’t talk about boys or dating or my relationship with my own mother – which by the way, is not at all complicated. And we don’t act like girlfriends or lend each other clothes and jewelry . . but sometimes I do catch her wearing my socks.

And sometimes I give up a whole weekend just to see how she smiles at herself in the mirror when we are done.