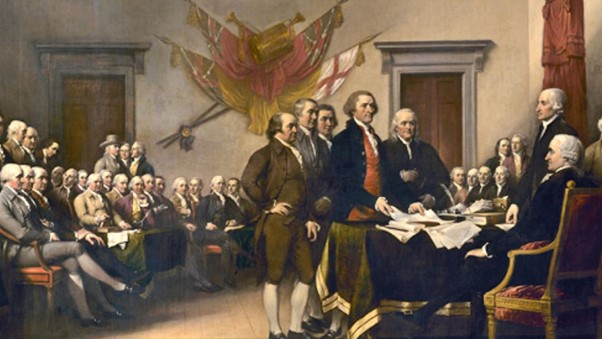 It was my husband yelling out to me from the kitchen and, of course, I immediately came. That was how my own personal experience of January 6th, 2021 began. I stared at the images on the TV screen in confusion for a while as my husband filled me in on whatever sketchy information he knew. After a long silence, the first thought popped out of my mouth.

“This is going to backfire.”

Over the next few days, like most Americans, I assume, I underestimated the seriousness and violence of the event. The fact that the Congresspeople were able to reconvene and finish their business gave me a false impression of what they had all just gone through. More videos began to emerge with some of them including almost comical elements. In particular, the scene of some rioters entering the Senate chamber included this little gem when you can hear one of them saying:

“While we’re here we might as well set up a government.”

I confess, I laughed out loud. So much that I had to wipe my eyes and blow my nose. I allowed my imagination to embark on an absurd whimsical journey. I pictured these clowns attempting to hammer out the finer points of their new constitution on the fly, while their maskless moron compatriots in other parts of the building were sharing helpful clues for the FBI and evidence for their future criminal trials to social media. I imagined these drafters of America 2.0 pulling it off and how someday, far off into the future, history books would replace that stuffy old painting of men in their silly wigs with this image of our new Founding Fathers:

While watching those first videos, I discovered something else within the swirl of my emotions. What was it about this crowd that disturbed me most? It was not their rage or frustration, their willingness to commit acts of violence or their bent for conspiracy theories. It was the fact that they all seem so . . . DUMB. Anyone can fall prey to extreme emotions or manipulation at times in their lives. Those are universal human weaknesses. But something can always be done about dumb.

Now, after watching the first two days of the Impeachment Managers’ presentation, laughter is no longer possible. They have been doing their very best to provide some education, but it is not clear that the walls of the Capitol breaching brains are penetrable. I can imagine that as these people watch the very same, very disturbing videos, their reactions are the polar opposite of my own: where I feel sadness, they feel exhilaration, my fears are their empowerment, my humiliation is their pride.

I think it is important that the world knows something. I own one of these now:

It is called a treadle hammer (or so google tells me) and the husband surreptitiously acquired it yesterday while professing to be out on a foray for bear’s garlic with our neighbor. I wondered briefly why they needed his horse trailer for this excursion. Now I know. When they got back, the husband sheepishly confessed the truth and then showed me our new possession. I stared at the thing and in that moment, it finally dawned on me: I am married to a serial hobbyist.

This realization really shouldn’t have come as a surprise. While organizing the basement storerooms last month, most of the work involved schlepping all of the husband’s (former) hobby paraphernalia from one place to another. Evidential remnants of his ever-shifting interests are everywhere in this house: the grape press and still acquired during his wine- and schnapps-making days, the kayaks and windsurfing sail and parachute left over from his various flirtations with extreme sports, shelves and shelves full of books on the perfect golf swing, cicada fish aquariums, woodworking, knife-making, bread baking, photography, mineral collecting, magic tricks, gardening, Asian cooking, etc. etc. etc. There is a self-made meat smoker on our front porch, a collection of old post-WWII bicycles under our back porch, a pile of Vespa parts in the basement along with enough fishing tackle and rods to equip an entire Boy Scout troop. I could go on . . .

But back to the treadle hammer. This new acquisition resulted from the husband’s latest interest, which I foolishly encouraged by gifting him a weekend seminar in blacksmithing where he made his first knife. He has been designing and building his own forge for the past few weeks, and now, with his new machine, he is planning where in our garden to set up shop. I assume there is an anvil somewhere in my future, too. (Sigh.)

After inspecting the machine, I went back to my laptop and was immediately confronted by this image, followed by a second sudden realization:

They’ve done it. I had begun to doubt the existence of the proverbial “rock bottom” (there seemed to be an unending supply of new lows), but these Twumpian Tea-Party-Offshoot protesters have finally managed to hit it.

If it were possible for fingers on a keyboard to sputter and stammer, mine would be doing it as I struggle to express my utter disgust. Is this woman ignorant of the Nazi sadism that led to these words being cast in wrought iron and hung over the entrances to concentration camps? Or worse, is she aware of that brutal history and nevertheless displaying her “clever” twisted word play and American flag-muzzle for the world to see? Either option is shameful.

Unfortunately, her stupid cardboard sign and my husband’s new toy are now inextricably connected in my brain. There is really no reason for it other than the timing of my seeing them. Or maybe it’s the similarity of the words tread and treadle, the first of which was on the Gadsden flags that Tea Party Old waved around.

One thing is clear, though. This woman and her compatriots are in dire need of a new hobby.

Day Two in Berlin began somewhat solemnly again as our walk through the center led us past the site of the Christmas Market attack right in front of Berlin’s iconic “Gedächtniskirche” – the bombed and burned out remains of the cathedral left standing as a reminder for the population of war’s devastation. But thereafter, things got happier and my biggest complaint of the day would have to be the peas in my tuna fish salad sandwich. 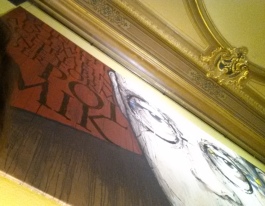 We let the girls roam KaDeWe and Bikini Berlin with wads of cash in their fists while Ly and I toured bookstores (“Ka-ching!!”) and then went to the Literature Café for a light lunch. Fabulous place – except for the peas. 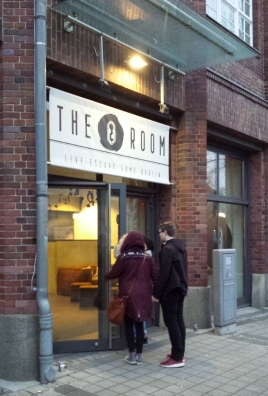 From there it was on to “The Room” – a live game with the theme of escaping from East Berlin in the 1980s. (My hubby made the reservations for us as part of our Christmas present.) We were given a short orientation and then led to a room. We entered. The door shut behind us. We had one hour to use all the clues hidden there to find our way out – the secret escape route to the West. If we failed, the East German Stasi (secret police) would break down the door and arrest us . . .

It was A LOT of fun, but unfortunately our teamwork and communication were a bit lacking. To make a long story short . . .

Our first full day in Berlin had a recurring theme. Bringing to light what once was intentionally not seen. Hidden treasures and hidden atrocities.

Our first stop was the concentration camp Sachsenhausen. As usual my own emotional reactions came after a delay. While walking through the exhibition my focus turned quickly to my daughters and how they were taking it all. In the first building dealing with the rise of fascism, there was still some conversation, but we all got increasingly silent.

Things got really rough at the “killing station” with its chilling matter-of-fact descriptions of efficient extermination procedures. Immediately afterward we weaved our way through larger than life-sized pictures of dead Russian soldiers. These images were printed on sheer cloth banners hanging from the ceiling. We had to zigzag through them and avoid their eyes. We were walking among ghosts.

That was when we all felt it. We had taken in as much as we could handle and it was time to go. At some point both girls wondered at the reasoning behind showing all these things – as if it were a tourist attraction. We talked about the importance of seeing these things with your own eyes. Of knowing what happened, facing it, and then maybe recognizing the warning signs in times when it could happen again. 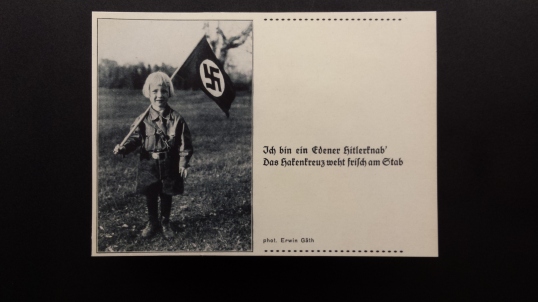 That is all the words on this I have at the moment. For a moving and more detailed account, read Lyart’s blog posts “Sachsenhausen” and “Sunday Matinee”

In the evening we went to the movies and saw “Hidden Figures” which did what it could as an antidote for the morning’s impressions. It wasn’t a perfect film, but this time it felt GOOD to see the once unseen being seen. 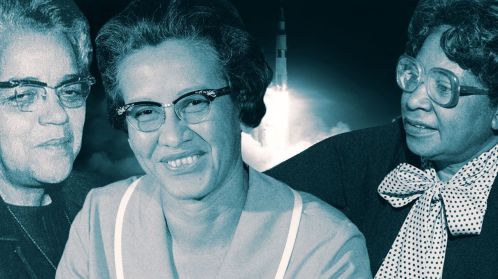